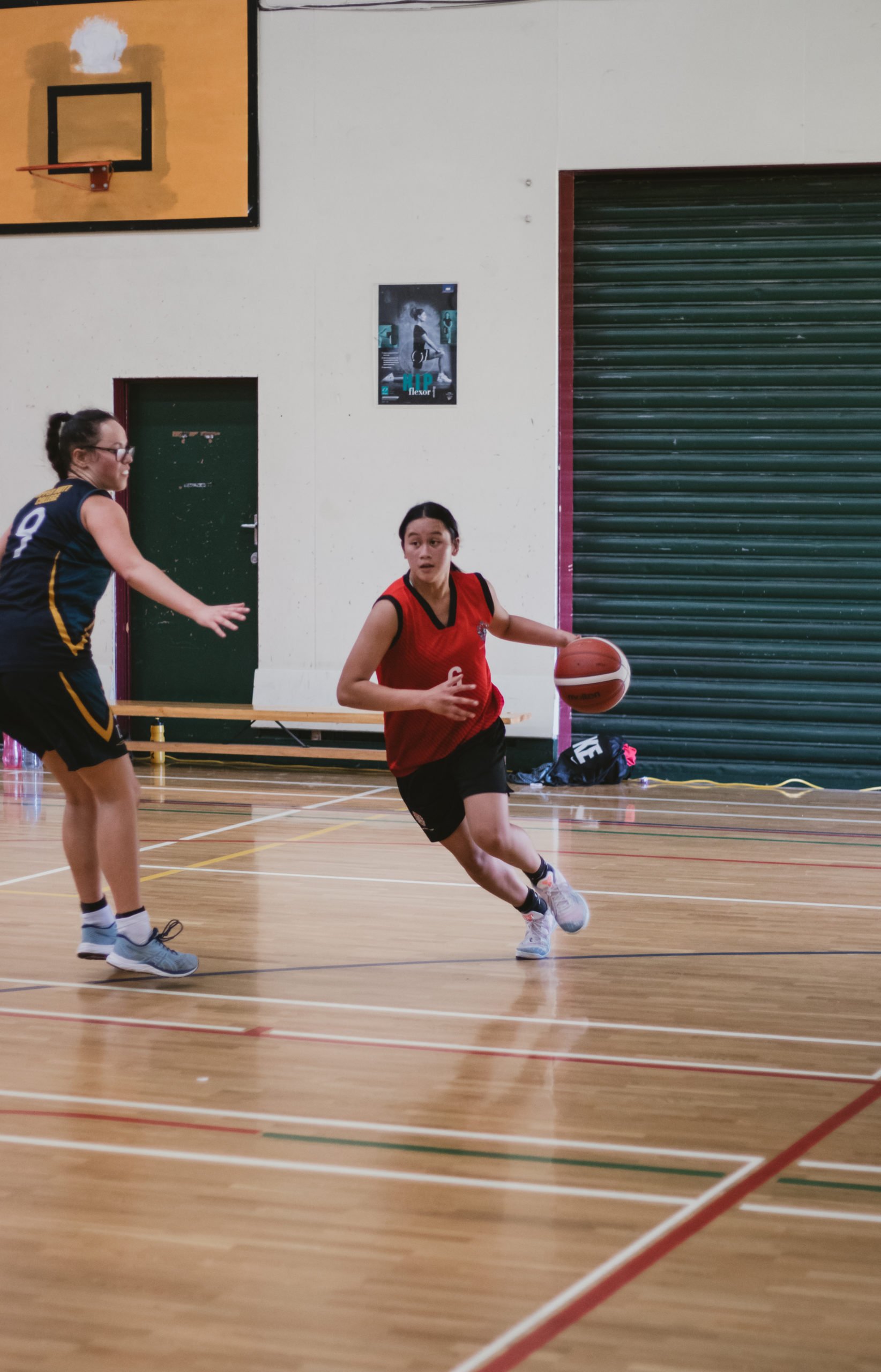 Nina Buot playing in her second season of The Summer Series

While Wellington brought on a scorcher of a day, Tawa was heating things up in the first round of the Triple Threat Summer Series 2020. Hutt Valley High School (HVHS) were on the hunt for sweet victory, after getting a taste of it in the pre-season match against Upper Hutt College (UHC). A strong impression was made early in the game by HVHS, as they scored off of the tenacious defensive pressure they set on Tawa in the opening minutes of the game. Before HVHS could get ahead of themselves, the returning Sam Gold sunk in 2 free throws and Tawa's power was reassured with offensive attacks from Tyson Thata and new addition Piripi Korrent. It was simple, as Tawa got the ball rolling, the points piled up.

Dunks from Korrent and Gold sustained how the rest of the game would go. Tawa's full-court press significantly disrupted HVHS' offensive flow, evidently shown in scoring 47 points off of turnovers and restricting their opponents' to only score 6 points in the third quarter. For HVHS to have a leader like Josh Crowley-Nepia playing 27 minutes and gaining an impressive stat of 11 rebounds, they were able to show persistence and determination until the very end. But with turnovers and fouls counting up for HVHS, the win was in sight very early for Tawa. Another newcomer Kaleb McDonald made an impression with 10 points off the bench, to which Tawa was able to seal the deal for Round 1 and make their mark as still being the major force in the Triple Threat Summer Series.

After witnessing a significant win for the Tawa boys, the girls from Wellington East Girls' College (WEGC) were ready to show everyone how to really get it done. Kapiti Basketball Association (KBA) brought old and new faces with Seri Rokotakala and Rachel Pike leading their team from the front. Familiar faces from WEGC punished KBA for turning over any possession, with Amaree Wikitoria showcasing a number of simple transition plays that usually required only a long darting pass to her teammates and a layup equaling to 6 assists.

Coming off the bench, Phoenix Patea also led her team through structured and finely executed plays that Coach Voldi asked for. Not all was bad for KBA though, even after being limited to scoring only 1 point in the first quarter. Defensive plays from Rokotakala lit a spark in KBA's performance down the stretch, by taking good shots and taking advantage of moments of broken down defense on WEGC's part.

WEGC's experience and structure was too strong against KBA, with an outstanding offensive performance by Isabella Tait-Jones scoring 35 points as she continuously drove effortlessly and swiftly to the hoop. A beautiful team performance by WEGC brought them a dominating win, but we have to credit where credit is due, and KBA's persistence and hard work in this game will not go unnoticed.

Upper Hutt College (UHC) were looking to bounce back from that preseason defeat against HVHS, but a game that was only played a few days ago seemed to have been a long distant memory. A convincing win against KBA was just what they needed for us to see the full spirited and eccentric team bench we remember from last year. With UHC star Ben McEvoy out due to injury, Tyler May stepped up and took over with a whopping 31 points and 11 rebounds to settle this game for UHC. The game started fairly messy for both sides, with a combination of turnovers and missed shots. After the first time out, UHC finally found their strides, as they were able to use a good balance of unselfish and selfish plays.

KBA were struggling with connections and finding their groove. Their inability to finish shots showed to be an obstacle for them throughout the game. On a lighter note, Wiari Faulkner from KBA gave the team some flare, as the dynamic point guard gained 9 points for his side with his flowing moves. Being selfish isn't always a bad thing in basketball, which UHC's players took advantage of by attacking the rim themselves. Jordyn Hemi-Bedford from UHC was able to make an example of this after gaining 18 points, and the rest of the team really came together as one as the minutes went down.

It just wasn't KBA's day, but we're looking forward to seeing what they have in store for the rest of the series. As for UHC, a vast improvement from the pre-season game has delivered a solid win for an exciting team.

We were graced with another convincing win for this first round, as the mighty Sacred Heart College (SHC) remarkably defeated newcomers Upper Hutt College (UHC). Last year's winners didn't hold back, even without most of their team. SHC's point guards Nina Buot and Tayla-Kei Laulau lead the charge with striking defence and penetrable offence, contributing a combined total of 48 points to the overall score. UHC started off with making a few baskets, but SHC seemed to strike right back with a triple from Peta Apineru - she even hit a buzzer-beating 3 to end the first quarter! Missed shots and turnovers were costly for UHC, as SHC simply took advantage and put the ball in the hoop.

It didn't help UHC that SHC laid a full-court press, and when I say full-court, I mean full-court. SHC's suffocating defence did not help UHC's case at all, especially with Brooke Hauraki-McKenzie applying pressure right up to the baseline. UHC's Lyriq Oliver performed greatly, providing 11 points and 8 rebounds for her team and even scoring all of their points in the third quarter. The tenacity we witnessed by SHC led to the piling of points throughout the game, eventually leading to the final score of 84 - 25. We can't wait to see how UHC can come back from this loss and how SHC will do with their full team back in action.

How can I sum up Heretaunga College (HC)  in two words? Minnie Simpson. Simpson is back from last year’s impressive season and her return was not disappointing. With both HC and Newlands College (NC) losing some essential players from last year, who was going to step up? Last year we were used to seeing Simpson letting the 3 ball fly, but her versatility shone through as she drove furiously to the hoop. She couldn’t do it alone though, as Carley Brooking provided 3 three-pointers and overall 15 points, 22 rebounds, 5 blocks and 6 steals - not a shabby stat line.

The combination of Simpson and Brooking led their team through a back and forth game, as NC could not give up the fight. Georgia Lincoln provided the leadership that NC needed to stay in this game, and she delivered with 21 points, 11 rebounds, 3 blocks. With help from Ella Betty’s 12 points, it was clear that this was NC’s duo to lead their team. With both teams recovering from the loss of players, both provided strong pairings that made us excited for the rounds to come.

NC provided plenty of new faces, and their fighting spirit is what helped them get them through this battle, but it wasn’t enough to get the win. In the end, the game was about who could score. With the ball in Simpson’s hands, her experience, determination and 35 points led to their win.