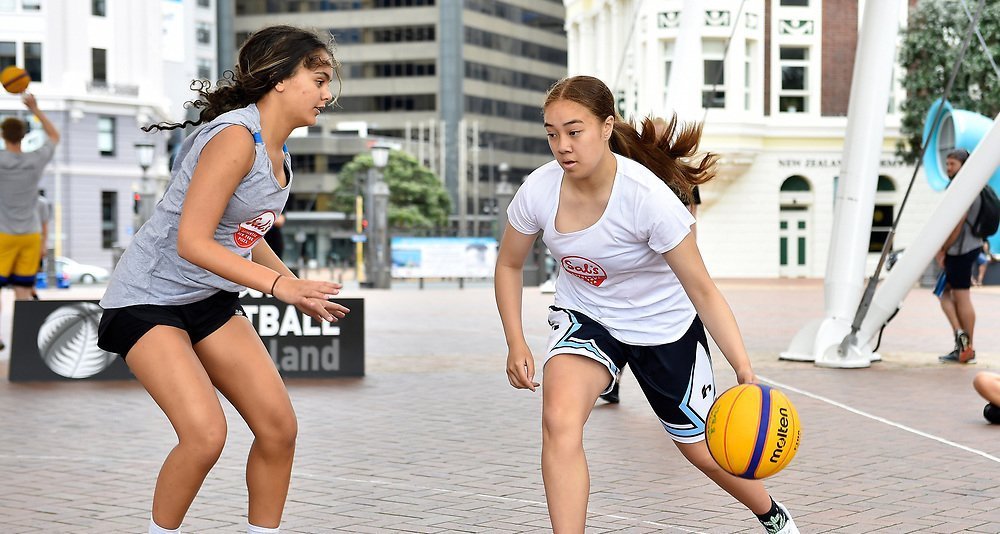 When we mentioned a few weeks ago that 3x3 was taking off in Lower Hutt, we meant it. The FIBA World Cup Qualifier match between New Zealand and Syria took place on Sunday afternoon, and featured a very special entertainment package before the game kicked off.

Outside of the TSB Bank Arena, two custom courts were chalked up to play host to the top four girls and boys 3x3 teams from past College Sport Wellington events. One of the teams was our very own Wellington East Girls' College, who were looking to get back into the 3x3 groove before the Summer 3x3 Tour begins later this month. The finals were to be played at centre court during the half-time break of the international fixture.

Wellington East began their campaign with an easy 12-4 win over Wainuiomata College. They then took on favourites Hutt Valley High School, and escaped defeat with a narrow 12-11 win. Going into the semi-finals as the favourites, rain came in which proved difficult in the outdoor environment, with the elements becoming a factor. East passed Paraparaumu College 16-11 to progress to the stadium final against Hutt Valley.

Chonie Folau-Douglas was handed the whistle for the Girls Final, while Emily Smith and Jake Young were put in charge of the Boys Final between St Pat's Stream and Rongotai. St Pat's won 8-7 in a close fought match, while Wellington East were defeated by a sharp shooting Hutt Valley team 11-9.

Congratulations to everyone who took part in what is a great eye-opener for the sport. If you want to get involved, check out the Basketball New Zealand 3x3 Tour page, which includes information on how to register. The 3x3 Tour will be hitting Wellington on The Summer Series Opening Weekend, 9th February. It's free to enter, so make sure you're there enjoying the sun!

You can view the full results by clicking here.